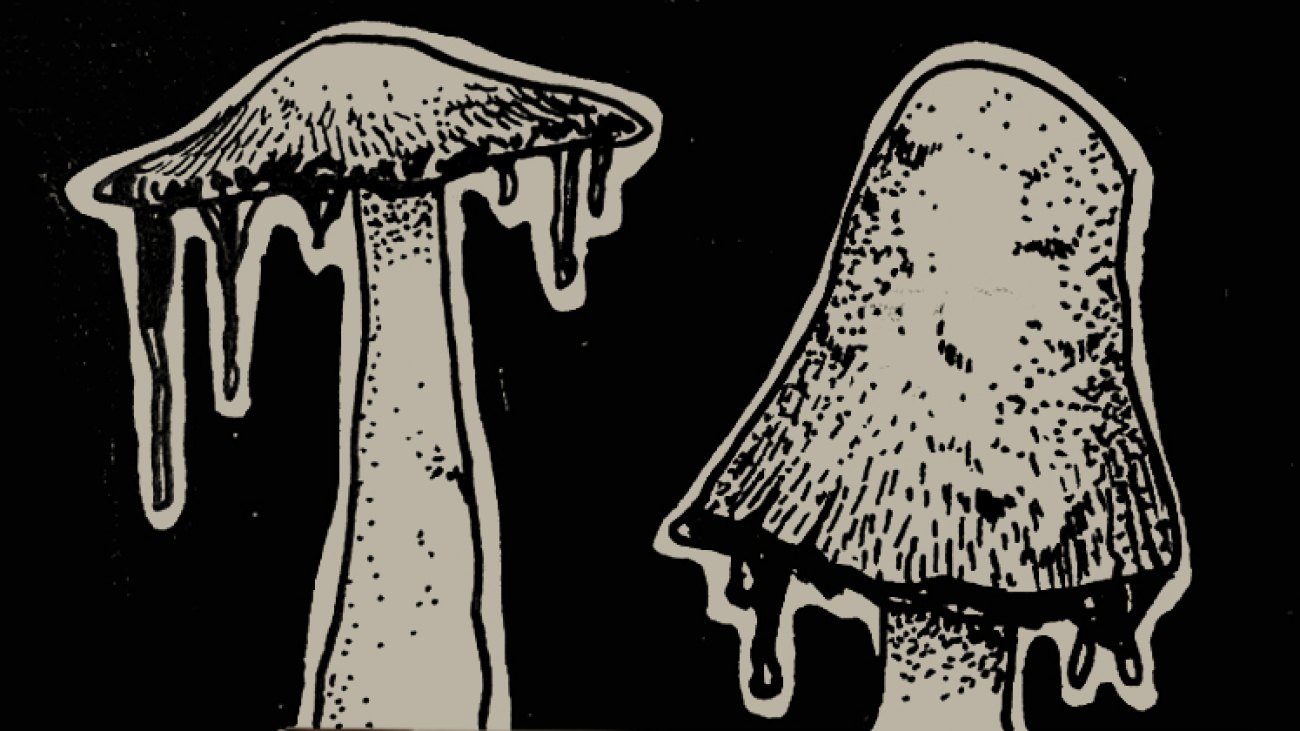 I wish I liked mushrooms – the taste, I mean.

I like everything else about them: The earthy colors, the mysterious shapes, the deep, dark, autumnal forests where they grow. I like that some are edible and I like that others can kill you. They have a mythical quality – like secret potion ingredients of some ancient folk tale. Pity most of them have the texture of a bloated funnel-web abdomen.

Mushrooms as a medium?

A fascinating mushroom is the Shaggy Inkcap. These distinct fungi begin life as ovoid bulbs before fanning out to a more familiar bell shape upon maturity. Their most striking feature is a deep, black, liquid – the spores – which drip from the cap like engine oil. Though their ghoulish appearance gives an impression of danger, the shaggy ink cap is perfectly edible. They typically grow in and around suburban lawns, and are quite common.

I’ve seen a few artists experiment with this ink, but didn’t think much of it beyond an interesting gimmick. Art is hard enough with quality supplies, let alone sticky goo from a mushroom.

When I chanced upon a small cluster growing on the side of the road, however, I thought; why not, and plucked them up.

I laid a few of the inkiest specimens gills-up on a paper towel. No further preparation was required.

The ink was surprisingly inky. Droplets were deep and shiny, and left black streaks on the skin. Given how congealed it appeared I expected some viscous stickiness, but dipping the brush between the gills absorbed a silky, watery medium.

I applied it straight to medium-toothed watercolor paper. Undiluted, the ink was slick, but did not stretch very far. With a little water was produced a smooth handling warm grey. Dark marks came from short pokes, but it was difficult to achieve opaque streaks from anything longer. Producing deep black required layering, though a good range of midtones was achieved with varying strokes. It drybrushed well and produced good texture.

Another quirk of this mushroom is that it degrades very quickly – usually a matter of hours after being picked. While this is a nuisance for anybody attempting to preserve a shaggy inkcap, this quality proves an advantage when painting. Black globules sweat from the gills continuously, replenishing the ink supply as one works.

Though nobody is trading their Pigma Microns for inkcap spores, shaggy inkcap ink proves a surprisingly workable medium. Paired with some good watercolor paper, it handles much like weaker India ink, giving good gradients and diluting smoothly. Imagine India ink watered down to 70%, and you’ll have a fairly good idea of what it’s like to work with a Shaggy Ink Cap.

I draw and write every day every night. Twitter is garbage.

As much as I love @FieldNotesBrand, the audiobooks suck.

Getting dressed is character design.

I wish #Photoshop was #Baptist so my files were once saved always saved.

The #Oodie should replace the white flag for universal symbol of “I give up.”